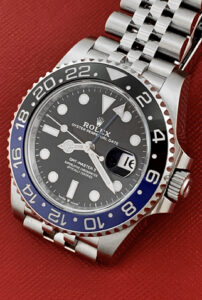 Years in production: 2019 - present The “Batgirl” is derived exclusively from the bracelet design on this particular watch model. The Batgirl features a Jubilee style bracelet (“five-piece link” design that forms a series of small X-shaped patterns) as opposed to an Oyster style bracelet (robust metal bracelet with flat three‑piece links) on the Batman watch. Both the Batman and Batgirl watch models have the ceramic/Cerachrom two-color black and blue watch bezels. 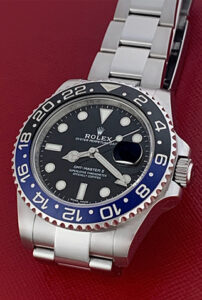 Years in production: 2013 - 2019 The Rolex 116710BLNR watch features a two-color black and blue ceramic bezel that Rolex calls Cerachrom. The nick name “Batman” comes from the black and blue watch bezel having similarities to the Batman comic book colors. 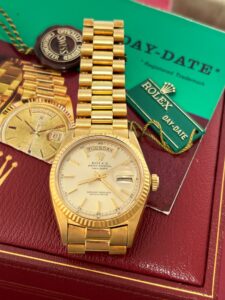 Years in production: 1956 - present A visually striking, all 18K gold Day-Date is the Rolex watch that many regard as the pinnacle of “luxury” for the world-renowned luxury brand. This timepiece earned the moniker “President” in 1965 after Rolex released an advertisement capitalizing on then president Lyndon Johnson’s affinity for the watch. Its unique “President” bracelet is exclusive to this model and to a lesser extent, certain ladies Datejust models. This bracelet combines elements of Rolex Oyster and Jubilee designs. Some Oyster bracelets can be found on the Rolex “President” model. 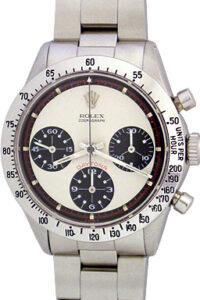 Years in production: 1963 - 1988 Certainly one of the most high value, sought after and iconic timepieces ever produced. The Rolex Daytona “Paul Newman” is distinguished primarily by the dial type, commonly referred to as “exotic.” Initially a slow seller, this particular dial was not manufactured in significant numbers, adding to the rarity and mystique of the timepiece. Installed as an option by Rolex, the original series of the Daytona model consisted of four different designs for the dial. Rumor has it that Paul Newman’s wife, Joanne Woodward purchased the watch for Newman in 1968 at Tiffany’s in New York for $200. The watch would later be auctioned at Phillips Art House in 2017 for $17.75 million. 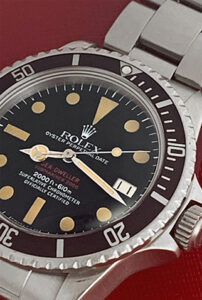 Years in production: 1967 - 1978 The nick name “Double Red” for this watch came from the two lines in striking, bright red text on a matte black dial that reads “SEA-DWELLER SUBMARINER 2000.” 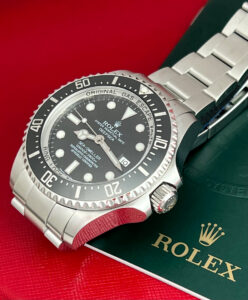 Years in production: 2008 - 2018 This model Sea-Dweller, having been designed for secure functionality to a depth of up to 12,800 feet was appropriately named “Deepsea.” A new and critically important component for waterproofness was the new Ringlock System developed by Rolex, an upgraded and highly effective method of seal between the crystal and case. An additional feature is a helium release valve for excessive gas buildup at depth. As for the case on this model, it’s quite large at 44mm with a thickness of 17.7mm. 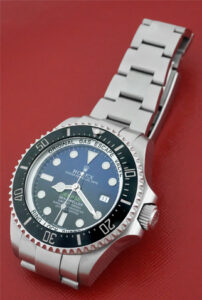 Years in production: 2014 - Present This limited edition Sea-Dweller “James Cameron” was released to commemorate the famed motion picture director’s March 2012 Deepsea Challenger dive to the ocean’s deepest point, Mariana Trench, an approximate depth of 10,898m or 35,756ft. The model was introduced with a couple of revisions from the previous Sea-Dweller model, namely a larger clasp and slightly smaller lug size. But the primary feature on this special edition Rolex is the blue dial Rolex named “D-Blue” This dial fades from blue to black much like the color change of the ocean as one goes increasingly deeper. 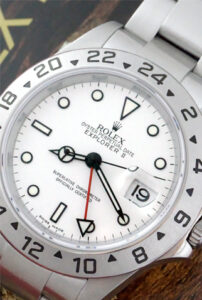 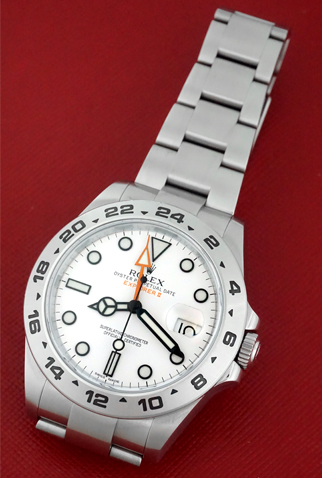 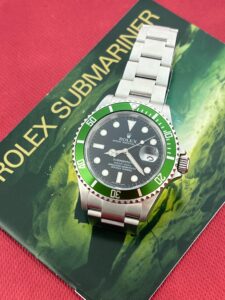 Years in production: 2003 - 2010 Rolex launched the 16610LV “Kermit” in 2003 to commemorate the 50th anniversary of the Submariner model line. The watch landed with initially mixed reviews due to its green bezel. This eventually caught on and has since attained legendary status within the watch collecting community. The new model featured enlarged hour markers and hands for improved legibility. Rolex named this the “Maxi Dial” and proved to be quite popular. 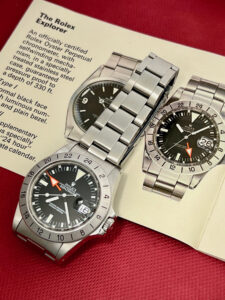 Years in production: 1971 - 1984 The “Steve McQueen” name, well known among aficionados for this particular Explorer II model came about from a 1970’s advertising campaign launched by Rolex with the aptly named “King of Cool” film star. At the time of its release, it was considered more of a functional tool watch specifically aimed at Speleologist’s (one who studies caves). It’s also interesting to note that although this watch is nicknamed after Steve McQueen, the actor never actually wore the watch. He was more of a Submariner guy. 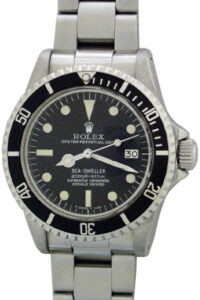 Years in production: 1977 - 1983 White text on the dial of this Sea-Dweller replacing the previous editions color of red helped give this watch model the name of “Great White.” Previous versions of the model led many enthusiasts to view the Sea-Dweller as a spin-off of the Submariner model line. This was due to “Submariner” having been printed on the dial. Starting with the 1665 ‘Great White,” gone are any references to the Submariner on the dial. 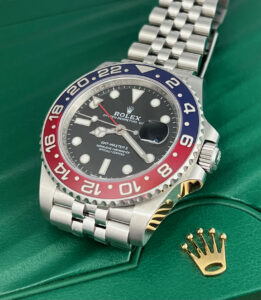 Years in production: 1954 - Present The blue and red bezel on this long running pilot’s watch having similarities to the color scheme seen on bottles of PepsiCo’s signature soda gives it the “Pepsi” name. But real watch enthusiasts know the colors were initially inspired by the colors of Pan American Airways, who gets credit for requesting a watch from Rolex that displays a second time zone. It’s also said that the red and blue colors represent day and night. 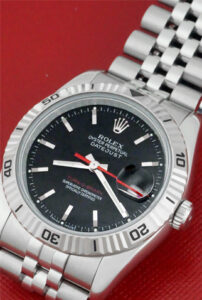 Years in production: 2000 - 2011 The origin of the Rolex “Thunderbird” name dates back to the late 1950’s. Rolex established a relationship with the USAF Air Demonstration Squadron named “Thunderbirds,” and the rest is history. The timepiece’s primary function that appealed to the pilots is the rotating timing bezel Rolex had developed and named “Turn-o-Graph.” 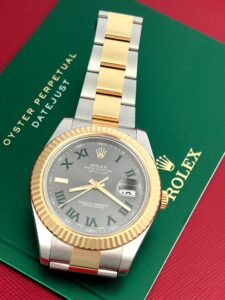 Years in production: 2009 - Present: Rolex status as official timekeeper of the legendary Wimbledon Tennis Tournament goes all the way back to 1978. A fitting tribute to the relationship resulted in what is now known as the Rolex “Wimbledon” Datejust. Since its launch in 2009 with the ref#116234, there have been a number of models, the Datejust 41 variety being the most sought after. A number of different styles and materials can be found in various examples of the “Wimbledon” including stainless steel, stainless steel and 18k yellow gold as well as stainless steel and Everosegold. Bracelets have been offered for the “Wimbledon” in both the Oyster and Jubilee design. But with this particular watch, it’s really all about the dial. Specifically, a slate gray dial with Roman markers outlined in green enamel.. 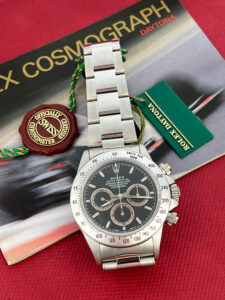 Years in production: 1988 - 2000 The Daytona “Zenith” model featured a modified movement, specifically, Calibre 400, providing the platform for a new Rolex 4030 movement. This was called the Zenith El Primero (the time/point at which something is at its most strength or successful). Multiple modifications to the base calibre were required to achieve the desired results for Rolex. 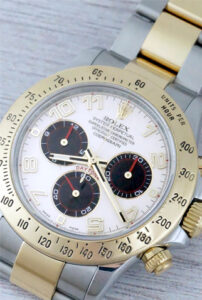 Years in production: 1963- Present The colors and configuration on the dial of this particular Daytona model for many Rolex fans resembles that of a Panda bear’s face. The required specifics for the “Panda” moniker to be applied is a white dial with black sub watch dials. 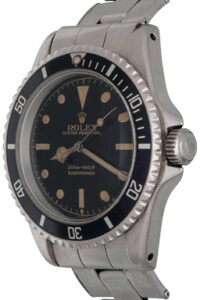 The 1966 Rolex Submariner Ref 5513 acquired the nickname “Bart Simpson” due to the oddly shaped coronet that looks like the oddly shaped cartoon character’s head. The specific feature on which the name was derived was short-lived, making this a rare and collectible timepiece. 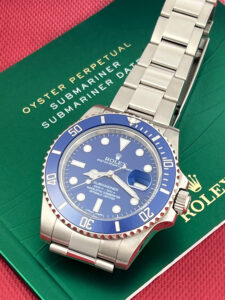 Years in production: 2008 - 2020 The “Smurf” model was introduced to the market with a series of very well-received features. Most notably a blue dial with a lacquered finish as opposed to sunburst, producing a visually striking wet look. Topping off the new dial was a matching ceramic / Cerachrom bezel. Additional noteworthy features introduced with the “Smurf” model include updated materials for the case and bracelet, an advanced and extremely durable form of 18k white gold developed by Rolex that is sometimes referred to as “gray gold.” Rounding out the upgrades for the model is the heavier “Super Case” with some added girth to the lugs as well as a “Glidelock” clasp. 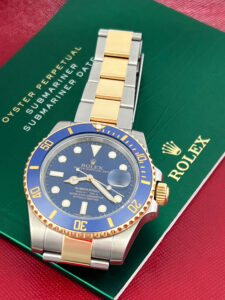 Years in production: 1988 - Present With its striking Royal blue dial and bezel the “Bluesy” nick name given to the model by collectors was an obvious choice. The first edition “Bluesy” featured a gold and steel oyster bracelet, Parachrom hairspring and precise COSC certified 3135 calibre. The latest incarnation of the Submariner model lineup, including “Bluesy” introduced in 2020, had some noteworthy changes. These included a new generation 3235 caliber, slightly larger case with slimmer lugs and wider bracelet. 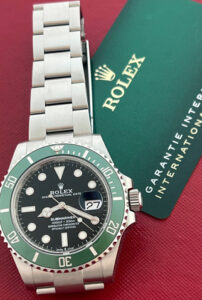 Years in production: - 2020 - Present The “Starbucks” name is derived from the famous coffee chain’s company logo having similarities to the dial and bezel of this late model Submariner. Slight revisions to the lugs (thinner) and bracelet (wider) on this model were well received. The Starbucks version of the Submariner is similar to the Kermit model with black dial and green bezel, but the Starbucks is a later version with ceramic bezel. 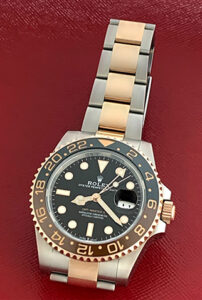 Years in production: Model 1675/3 1970 - 1989, Model 16713 1989 - 2006, Model 126711CHNR, 2018 - Present The Rolex “Root Beer” GMT-Master II 16713 was launched with several significant upgrades from i’s predecessor (Model 1675/3). The most significant of these improvements for most Rolex fans was the model’s ability to display three time zones. The previous model displayed two. This was made possible by adjustable 12 hour and 24 hour hands. The current version of the iconic Rolex “Root Beer” model is the GMT-Master II 126711CHNR. Some technical attributes of this watch consist of a 3285 caliber and power reserve of 70 hours. A Parachrom hairspring vastly improves shock resistance. Additional changes consist of Oystersteel and Everose gold for the case and bracelet as opposed to stainless steel and yellow gold on previous versions. The bezel was upgraded to a more scratch / fade resistant ceramic material Rolex developed known as Cerachrom. 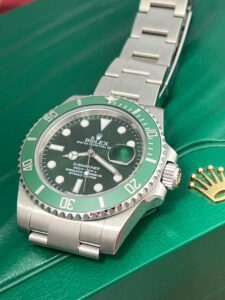 Years in production: 2010 - 2020 The green dial on this particular Submariner model takes the guess work out of the nickname’s origins. This was the first green dial on a Submariner model. Additional firsts for the model include a Cerachrom / ceramic bezel, Glidelock clasp, Cromalight display and Super Case. 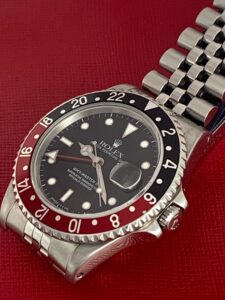 Years in production: 1989 - 2007 Universally known among Rolex enthusiasts for its black and red bezel. The “Coke” nickname for this Rolex is derived from the model’s bezel resembling the color scheme on the bottle of the Coca-Cola company’s signature soda. 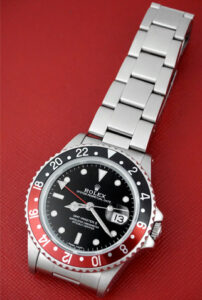 Years in production: 1983 - 2007 The nickname for this model comes from the noticeably larger case. The increase in size was required to accommodate a more complex movement that Rolex had developed for the model. Specifically, this movement features a quickset hour hand and a 3085 caliber movement. Rolex rounded out the new look with a wider bezel and beefier crown guards. 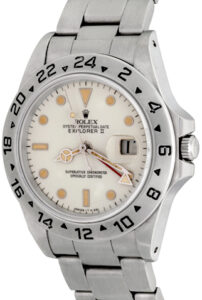 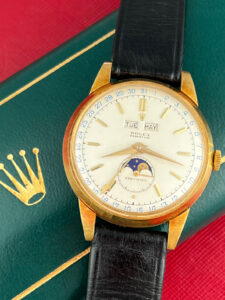 Years in production: 1949 - 1952 This very rare, low production numbers timepiece has the nickname “Padellone,” derived from the Italian word for “Big Frying Pan." A 38mm case size was considered quite large at the time of its short production period. This complicated timepiece features three apertures displaying phases of the moon, day and month. The date is displayed on the dial’s outer track with a pointer hand.