Join us as we learn more about the history of Patek Philippe from 1839 until today!

"Founded in 1839, Patek Philippe is the last independent, family-owned Genevan watch manufacture. With a vibrant, uninterrupted operating history spanning nearly 180 years, the company benefits from a unique legacy of tradition and innovation. From Antoine Norbert de Patek’s encounter with Jean Adrien Philippe to Thierry Stern’s presidency, from the first pocket watches to the very latest super complications – discover the pivotal events that forged the history of Patek Philippe and the entire watchmaking industry found at https://www.patek.com/en/company/history#movies."

The Rolex Sea-Dweller, icon of the deep has origins going all the way back to 1960. The industry standard in dive watches at the time was Rolex’s own Submariner model, originally introduced in 1953. As divers began venturing to increasingly deeper depths of the ocean, a problem arose with the Submariner that would have Rolex going back to the drawing board in search of what would become a new and groundbreaking design in horology. Enter a special prototype timepiece Rolex dubbed “Deep Sea Special.” This was anchored to the exterior of another highly specialized instrument, specifically, a deep-sea exploration vehicle named “Trieste.” Together they descended to the deepest known depth of the ocean named the Mariana Trench. Both performed flawlessly and history was made with the inclusion of a message from crew member Jacques Piccard stating that the Rolex watch was as precise at 11,000m as it was it was on the surface. Not long after this monumental feat the effort was underway by Rolex to design a dive watch suitable for depths that would normally wreak havoc on commercially available dive watches at the time. The developments required for success were not exclusive to the obvious stresses put upon the timepiece by the increased depth of a dive, but more important, the unavoidable and often hazardous complications that arise from decompression as the diver ascends to the surface. With deeper dives comes a dramatic buildup in pressure from a combination of nitrogen and helium. This phenomenon proved to be the death knell for many of the very best dive watches of the day, and with that Rolex set out to develop the very first pressure release valve on a timepiece to solve the problem. With this revolutionary innovation, a new, state of the art generation of timepieces for serious oceanic adventure was born. Let’s take a deep dive into the various incarnations of prototype Submariners and standard issue Sea-Dweller models that have offered generations of saturation divers’ timepieces that are both functional and reliable. 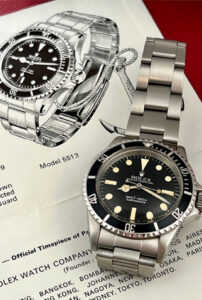 Our story behind the Rolex Sea-Dweller cannot be told without mention of two specialized, prototype Submariner models offered by Rolex to the Compagnie Maritime D’Expertise (Comex), an elite team of French saturation divers. After several standard issue Rolex Submariners had structurally failed due to the increased depths the watches had encountered with the team, Rolex was approached with a request for a more durable alternative.  Rolex went on to develop and patent the groundbreaking feature for what was needed in a Helium Escape Valve (HEV). This auto activated mechanism allows gas to escape through a unidirectional valve without sacrificing waterproofness. These two experimental models are quite rare and valued highly among watch collectors. 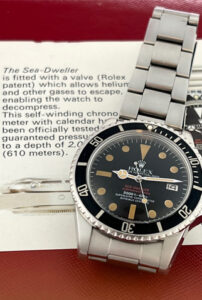 In 1967 the Rolex “Sea-Dweller” model 1665 was introduced. This was Rolex’s first offering for public use to feature the new HEV mechanism. The model became known by collectors as the “Double Red” due to the two distinct lines of red text on the dial that read: SEA-DWELLER SUBMARINER 2000 Many considered this model ref#1665 to be a spinoff of sorts to the Submariner model line, hence the name on the dial. This is a relatively rare and very desirable timepiece of historical significance. 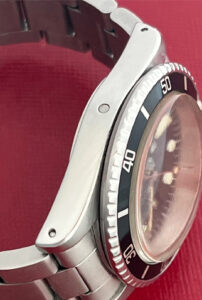 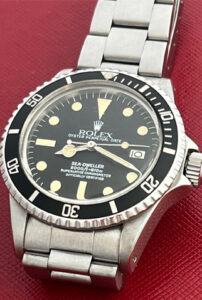 This particular Rolex Sea-Dweller retains the ref# 1665 yet, thanks to a couple of simple but nevertheless noteworthy revisions to the dial a new name was offered (by Rolex aficionados) and a new category of the model was born. First off, the Submariner name disappeared. This helped to solidify the perception that the Sea-Dweller was a distinct and separate model from the Submariner in the Rolex lineup. Next was a change from red to white text, hence the name “Great White.”

The follow-up version Rolex Sea-Dweller was launched with a significant improvement to the depth rating. A new sapphire crystal (replacing plexiglass), larger case size and improved design for the HEV mechanism all enabled the watch to function at the depth of 1220m -- roughly double that of its predecessor. 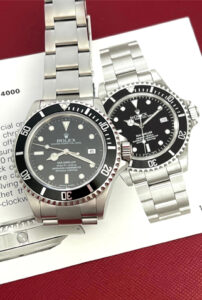 Next in the development of the Sea-Dweller is the model Ref# 16600 which featured an improved caliber (3135) as well as an advancement in the power reserve (48 hours). This particular iteration of the Sea-Dweller has had the longest production run. Developments of the model throughout its production period pertained to the type of luminescence material installed on the dial with a total of three variants. 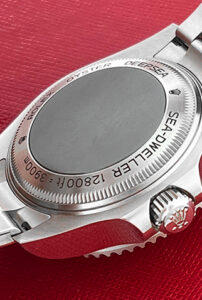 The next and current Sea-Dweller commonly referred to as “Deep Sea” came with impressive depth rating of 3,990m. This was made possible by a thicker, domed sapphire crystal as well as a Ringlock System developed and patented by Rolex. The case size increased to 44mm, and Rolex incorporated a next-generation 3235 movement advancing the power reserve to 70 hours. The model was released with two dial options, black followed by a specialized blue to black fade replicating the color scheme of the ocean that a saturation diver would see upon descent.  Rolex called this special dial option “D-blue” and the model ref# 126660 with this dial option is known as the “James Cameron” Deep Sea.